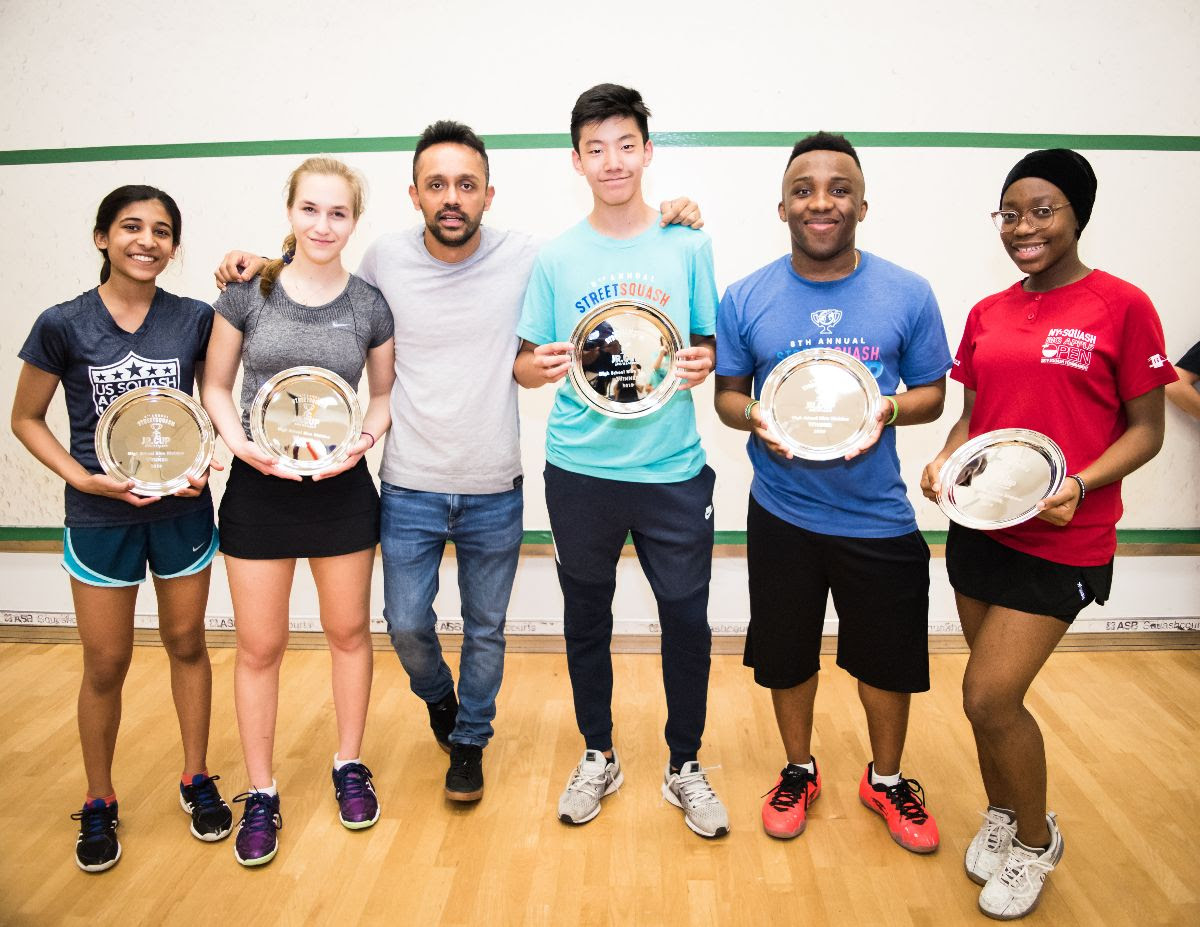 On Saturday, April 13 and Sunday, April 14, the SL Green StreetSquash Center welcomed over 100 junior squash players and community members for the 9th Annual StreetSquash Jr. Cup. The tournament is one of the largest fundraising events of the year, featuring teams of junior players from the greater New York City area competing alongside StreetSquash students for a celebratory round robin. This year’s tournament was packed, with 18 teams participating, a record-high, and raising over $91,000 to support StreetSquash students and programs.

“The Jr. Cup is a really terrific event because it affords junior players the opportunity to compete hard on court, while coming together for something much greater than a squash tournament,” says Executive Director George Polsky, who first launched the peer-to-peer fundraising tournament in 2011. “It’s astounding to see the event grow each year, with hundreds of participants and family members taking an interest in the work we’re doing in Harlem and Newark.”

On Sunday, eleven teams battled it out in the high school competition. Familiar faces included the Gators, the Harvard Club, the Hawks, the Sabers, Smart Squash, Team Wagih, and Team Squash-Fit. New to the tournament this year were the Lions, Mo’s Squash Team, Twenty Nine-Team, and our sister program from Israel, SquashBond, all of whom made a splash in the high school competition for the first time.

The tournament also included a new format this year: seven-minute timed matches. With the clock running, the pressure amplified across every match, and the intensity and importance of each point permeated throughout the building.

The competition was close as the matches concluded in both divisions, but Mo’s Squash Team emerged victorious among the Red Division, while the combined team of the Squash-Fit Gators captured the title for the Blue Division. As a team, the Gators also led the field in fundraising efforts, bringing in $12,500 for StreetSquash. Julia Fink, co-captain of the Gators, reflected on her time at the tournament, “the StreetSquash Jr. Cup is such a fun way to come together as a community. As a junior squash player in New York City, I see the academic and athletic opportunities that StreetSquash provides, and I want to do as much as I can to keep these opportunities available for as many students as possible!”

StreetSquash is grateful to all of the teams, coaches, players, and supporters who helped make this event possible. StreetSquash also owes a great deal of gratitude to event sponsors Dunlop and Technifibre for generously donating exclusive gear and equipment to the event.

To see all highlights from the tournament, click HERE!