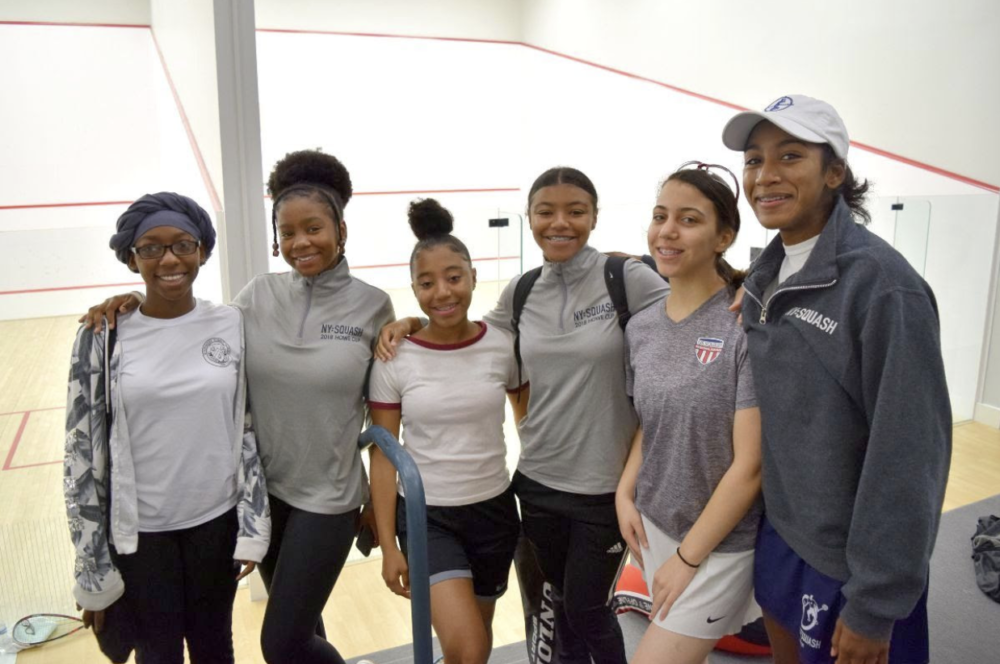 Over the weekend of November 9 – 11, StreetSquash marked its seventh appearance at the Howe Cup, the national women’s team championship. Held at the Philadelphia and Germantown Cricket Clubs, 275 participants competed for three days in singles and doubles draws. In an effort to expose students to new friendships and to broaden their networks, the Squash and Education Alliance and US Squash provided StreetSquash students with the opportunity to compete in the tournament alongside athletes from across the country. This year, 22 StreetSquash representatives played for teams hailing from New York, Philadelphia, and Baltimore.

Embarking on their first-ever Howe Cup experience were sisters Jessica and Michele, both in the tenth grade and the youngest of the StreetSquash contingent. The girls, who are generally attached at the hip, played for different teams in the D division. While they could have fallen to the intimidation factor of being separated in a new environment, surrounded by hundreds of women on teams from eleven states and Canada, they instead pushed themselves to the limit for the unique opportunity. “Jessica and Michele stepped up to raise their level of play at the toughest competition that they have ever attended, making sure to take notes from more experienced students,” remarked StreetSquash staff member Zoë, who was impressed by the girls’ effort during the tournament. 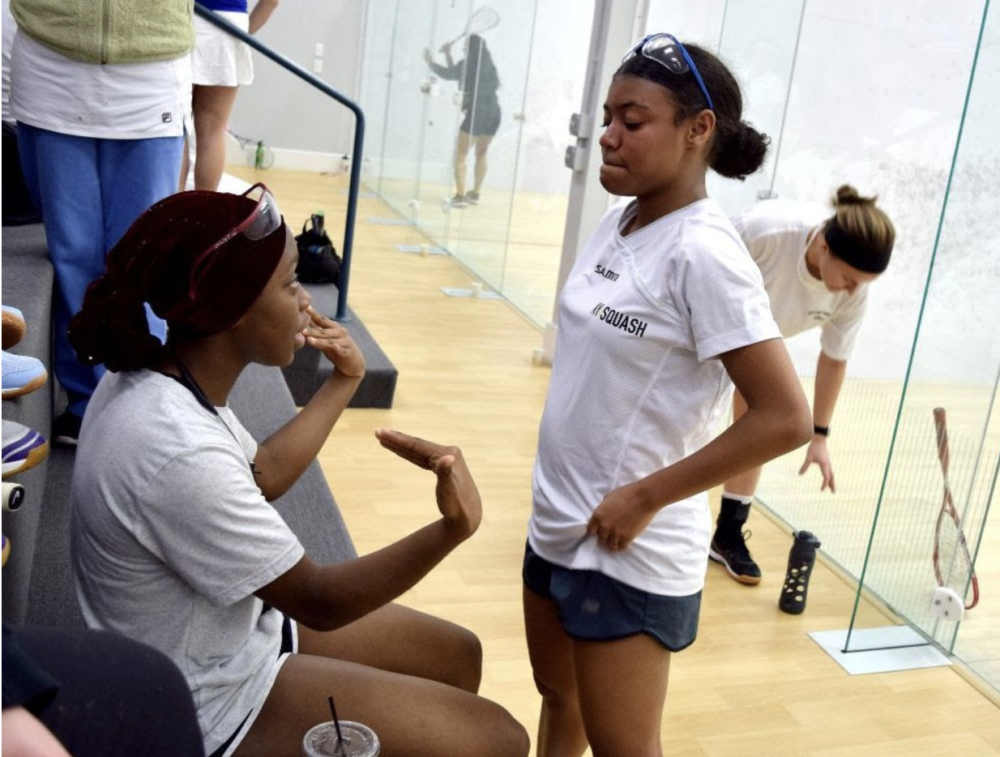 Zeinab ’19 coaches Jessica ’21 during a five-game match that Jessica then went on to win.

Zeinab ’19, was struck by the determination that her younger peers displayed over the course of the weekend. A high school senior returning to the tournament for the second time, Zeinab won all of her matches in the B division. “I am happy with my results, but I am even happier to see younger players stepping up and playing beyond what they thought they were capable of,” Zeinab shared. “Jessica and Michele both reminded me of myself as a younger player.”

Another player whose hard work paid off was Aye ’19, a senior participating in her third Howe Cup. Playing #1 on her team alongside Squash Coordinator Carly, Aye did not allow an initial five-game loss to get her down. Making it to the finals, Aye rallied for her New York Squash team, and even helped decide the match with a four-game win to clinch the title. The StreetSquash contingent was thrilled for Aye and Carly, who brought home the only trophies for New York Squash! 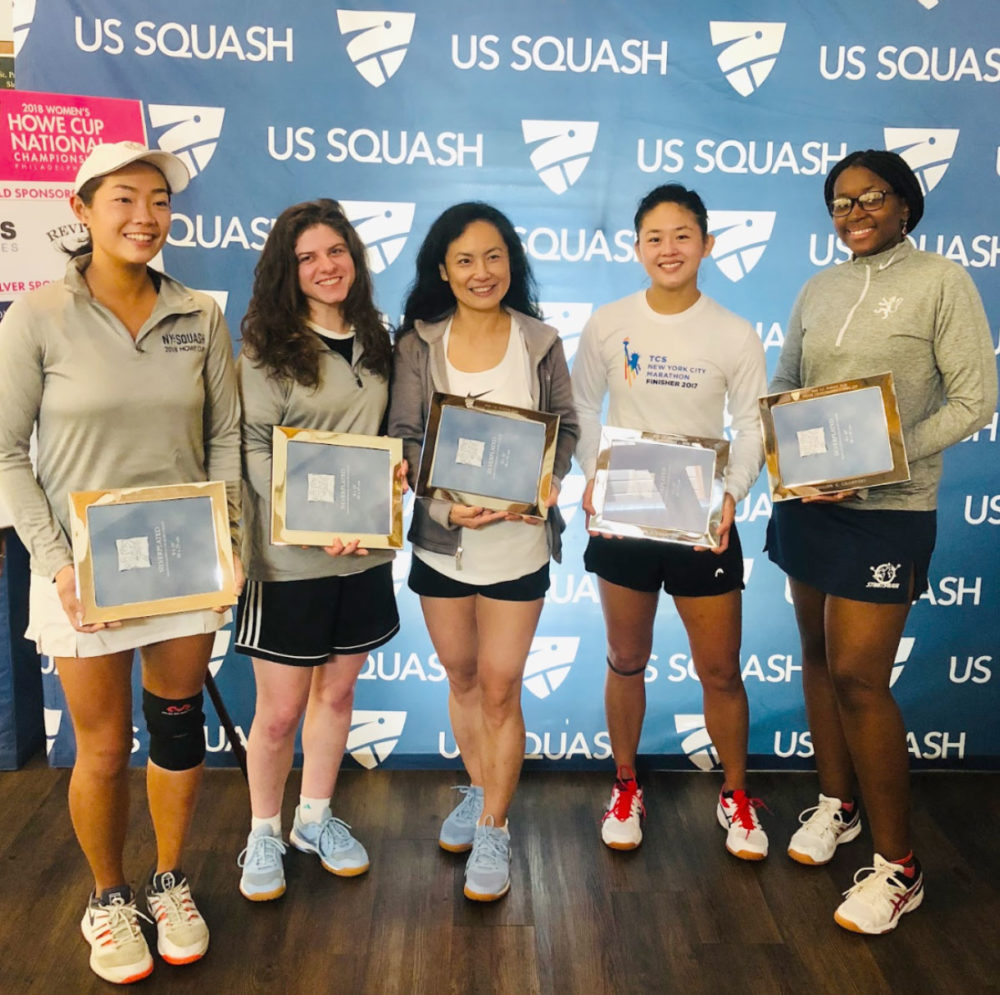 Squash Coordinator Carly (second from left) and Aye ’19 (far right) are presented with their C Division Trophies along with their NY Squash teammates.

Senior Academic Director Taralyn led an all-StreetSquash team at the event, which was also her first time playing in a squash tournament since competing for StreetSquash as a participant in 2005. “I felt a huge responsibility to be a squash role model to the girls I work with,” Taralyn shared. “My girls and I represented the team aspect of StreetSquash to the fullest. We cheered for each other as a team and fought through tough matches of the tournament together. We even stayed cohesive off-court by breaking down some cool dance moves at the annual reception on Saturday night.”

The camaraderie throughout the weekend resonated with Tindakay ’19, a senior playing in her second Howe Cup. “It is so special for me to meet so many amazing women, including the host of our homestay, and the directors of the tournament,” Tindakay reflected. Tindakay and the entire group were grateful that our attendance at the event was again made possible by dedicated organizers at New York Squash, the Squash and Education Alliance, and supporters of StreetSquash. Our generous host and fellow competitor Jennifer Wales, a local squash player, made us all feel welcome with family dinners, squash advice, and homemade cookies!

As the players headed home on Sunday, the soreness and fatigue setting in, Jessica announced her hopes to continue the Howe Cup tradition. “I just want to thank everyone who convinced me to go to this tournament, even though I didn’t know what it was,” Jessica shouted proudly to her peers. “I had my best matches ever; I loved everything about my team and meeting new people – just know that I will be going again next year!”